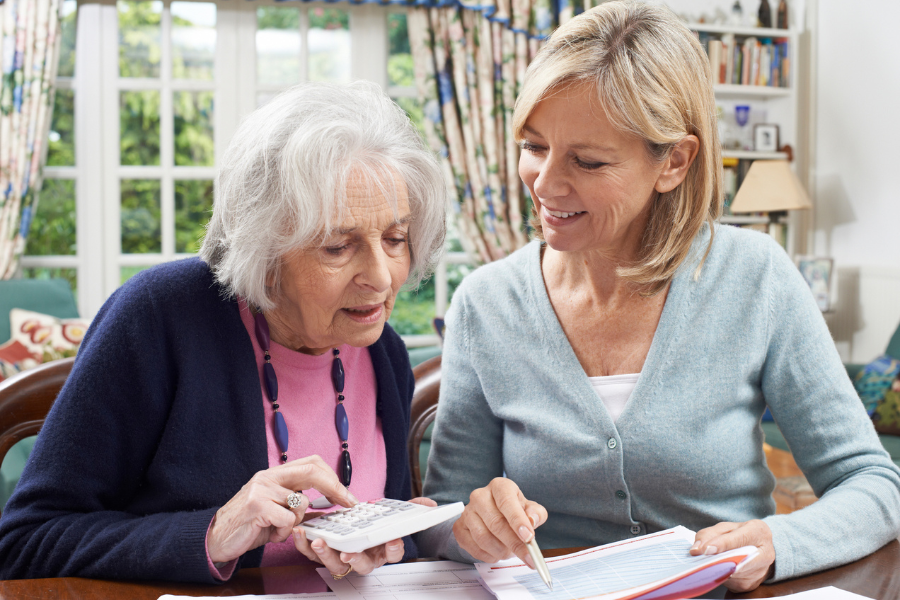 As couples age, some make the decision to move closer to family. Grandparents enjoy seeing their children and grandchildren and appreciate having extra support if they need it. But when Don and Marjorie, both in their late 80s, decided to move closer to their daughter, Amy, Don’s health was declining fast. Amy knew she needed to understand her parents’ financial situation quickly — to get her dad the care he needed and ensure her mom would be financially secure after Don’s death. Amy’s friend referred her to Wayne Titus, a financial advisor at Savant Wealth Management in Plymouth, Michigan, for help.

Amy’s dad had always been meticulous about family finances. “He had a binder with all of his information if something happened to him,” said Amy. “Dad was also of a generation that did not trust one person to handle everything. He had spread his money out among several advisors, so no one person knew all of his financial information.”

Don showed Amy the binder whenever she visited, but Amy noticed that as Don’s health declined, he wasn’t able to maintain the binder as he had in the past. “The pages were out of order, and he had sold things we didn’t know about,” she said.

As his health started failing, Don and Marjorie decided to move to Michigan to be near Amy. As they prepared for the move, Amy said Don tried to help Marjorie understand the couple’s financial situation. “My mom really knew nothing about it, and it was hard for her to grasp,” she added. Amy knew she needed to find professional help, and called Wayne Titus, CPA/PFS, AIFA®, a financial advisor and managing director of Savant’s office in Plymouth, Michigan. “We asked Wayne to help us figure out where everything was, and to help us try to get it together.”

“Don had some annuity contracts that had not yet been annuitized into monthly payments,” said Wayne. “When I first talked to Amy and Marjorie, they were exploring the idea of turning on the annuities to create an additional small monthly income stream to help pay for Don’s care. But that wouldn’t leave much for Marjorie to live on if Don died.”

Wayne reviewed the policies and discovered that two had life insurance riders containing a death benefit, which could help Marjorie maintain her lifestyle after Don’s death. Within the remaining policies, Wayne converted the assets to diversified investment funds with lower fees.

“We were about to cash out all of the annuities, but Wayne told us to hold on to the ones with a death benefit,” said Amy, “and when my dad died a short time later, my mom received a large lump sum instead of the small monthly amount she would have received if we had cashed out the annuity.”

“It would have taken Marjorie 20 years of annuity payments to match the lump sum amount she received,” said Wayne. “Getting the lump sum enabled her to continue living in her home until her death.”

In getting to know Amy’s family, Wayne also learned that Don was a veteran. “We arranged a meeting with the Veteran’s Administration and helped secure something called “Aid and Attendance” benefits – coverage of monthly expenses of qualified veterans to help pay for care. The VA also provided no-cost funeral arrangements for Don, enabling the family to avoid costly funeral expenses.

Marjorie had made an appointment to see Wayne and discuss becoming a Savant client. Unfortunately, Don died the day before the appointment. “I called Wayne and said, ‘Hey, you know we have this appointment with you… my dad died yesterday, but my mom still wants to come in.’ Wayne offered to postpone the meeting, but my mom really wanted to keep it,” Amy said.

“At the meeting, we kept moving forward, and that helped give Marjorie comfort that she was going to be OK,” said Wayne. Marjorie became a Savant client the day after her husband’s death.

Before Don died, Wayne worked with Don and Marjorie’s estate planning attorney to place their condo in a trust. “It was the last document my dad signed,” said Amy. “My mom was able to live independently in the condo after Dad died, and she was comfortable,” she added.

Unfortunately, a fire destroyed Marjorie’s condo a couple years later. “Our son arrived at my mom’s house and saw smoke,” said Amy. “He rushed in and was able to get her out safely, but she lost everything – with the exception of the family photo album and a few keepsakes.”

Amy called Wayne again for help. “He was able to answer my questions and work through what to do next,” she said. Marjorie eventually moved in with Amy’s family and remained there until her death a few months later. Wayne worked with Amy to settle her mom’s estate. At that point, Amy and her husband, Mark, decided to become clients of Savant.

“This experience taught me the importance of getting involved in my parents’ finances sooner, while they were still healthy,” Amy said. “Wayne and his team were so knowledgeable, and I could call them about anything. If Wayne didn’t know the answer, he would find out and call me back.”

“Studies show that as we age, we can lose our ability to manage numbers and the complexities associated with it,” said Wayne. “It’s nothing to be ashamed about. It’s just natural, so it’s important to have people involved who you trust – whether it’s a family member or an outside advisor.” Amy, a mother of three herself, plans to involve her children earlier based on her experience.

“I also learned that it’s important to pick the right person to work with – someone you’re compatible with – because there will be a lot of emotions to work through,” Amy said. “I now feel like I have the support I need, and I know who I can turn to for help. It’s a huge relief.”

Please Note: The testimonial provided was made by a current client of Savant Wealth Management (“Savant”). Clients were not compensated, directly or indirectly, for providing any testimonial of Savant, its Advisers or their services. Keeping in mind that no two clients, situations, or experiences are exactly alike, the client testimonial should not give any assurance that Savant may be able to help any client achieve the same satisfactory results. To the contrary, there can be no assurance that a client or prospective client will experience a certain level of results or satisfaction if Savant is engaged, or continues to be engaged, to provide investment advisory services.

Please remember that past performance may not be indicative of future results. Different types of investments involve varying degrees of risk, and there can be no assurance that the future performance of any specific investment, investment strategy, or product (including the investments and/or investment strategies recommended or undertaken by Savant, or any non-investment related content, made reference to directly or indirectly in this testimonial will be profitable, equal any corresponding indicated historical performance level(s), be suitable for your portfolio or individual situation or prove successful. Due to various factors, including changing market conditions and/or applicable laws, the content may no longer be reflective of current opinions or positions. Moreover, you should not assume that any discussion or information contained in this testimonial serves as the receipt of, or as a substitute for, personalized investment advice from Savant. To the extent that a reader has any questions regarding the applicability of any specific issue discussed above to his/her individual situation, he/she is encouraged to consult with the professional advisor of his/her choosing. Savant is neither a law firm nor a certified public accounting firm and no portion of the testimonial content should be construed as legal or accounting advice. A copy of the Savant’s current written disclosure Brochure discussing our advisory services and fees is available for review upon request or at www. savantwealth.com.

It can be scary and difficult to talk to your family about your finances. But the holidays can present a perfect opportunity to start the conversation.
Learn More
November 15, 2022

Can You Afford to Retire Now? Use the “3 Rs” to Help You Decide.

2022 hasn’t exactly been a banner year for the U.S. economy. If recent events have caused you to think twice about retiring, you're not alone. Financial advisor Justin Smith provides three action items to help you decide.
Learn More