Rebalancing: A Trick or a Treat? 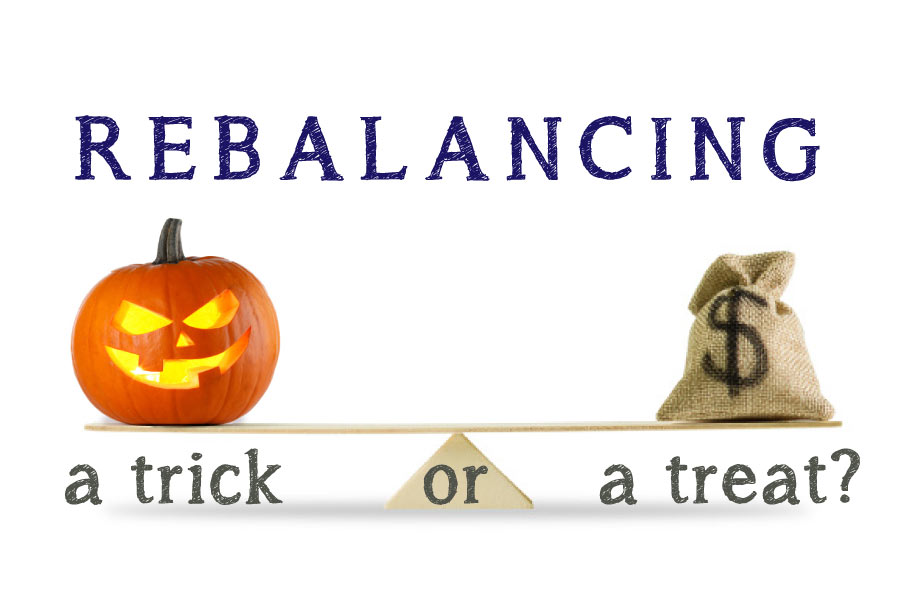 The act of rebalancing your portfolio may seem like a “spooky” proposition. After all, it requires trimming from what has done relatively well and adding to what has done relatively poorly. If the rebalance occurs at an inflection point for the markets, you might get a nice “treat” in the form of a bounce in returns from mean reversion taking hold. On the other hand, a continuation of the prevailing market trend that led you to rebalance in the first place may have you feeling as though you have been tricked.

The roller-coaster that was the first half of 2020 has provided a real-life example to analyze the impact of various rebalancing strategies relative to a “Buy and Hold” portfolio that has been left alone. In this exercise, our starting portfolio is a simple 60/40 mix of global stocks (MSCI All Country World Stock Index) and U.S. bonds (Bloomberg Barclays U.S. Aggregate Bond Index). We then compare the performance of four portfolios – one “Buy and Hold” and three that rebalance back to starting weights at different intervals. The three different rebalanced portfolios are monthly, quarterly, and drift-based at a 5% +/- tolerance band.

In March of this year, stock markets around the world experienced the swiftest and sharpest bear market on record. We know with the benefit of hindsight that the market bottomed on March 23rd. Anyone who is honest with themselves will attest that it didn’t seem like the worst was over at that time.

Unless you’re extremely lucky, it’s unlikely you will rebalance at the exact peaks and nadirs of the market. Luckily, you don’t need to for rebalancing to be a valuable tool. Risk management, not return maximization, is the name of the game. An investor who rebalanced their portfolio in the fall of 2008 would have looked like a fool as the market continued to tank. However, if they had not done so, the portfolio would have looked much different than intended. A 60/40 stock/bond portfolio may have morphed into a 40/60 by the spring of 2009, potentially missing out on material gains as the stock market roared back to life. The cumulative benefit of rebalancing becomes more apparent as time passes, as illustrated above.

The act of rebalancing is not a comfortable one. Nor should it be, as it requires acting against our own basic instincts. But as Rob Arnott of Research Affiliates is fond of saying, “in investing, what is comfortable is rarely profitable.” Rebalancing may feel scary in the moment, but we are confident that over time it will help provide more treats than tricks. The alternative – a static portfolio – may end up being more frightening in the end.

Savant Wealth Management is a Registered Investment Advisor. Different types of investments involve varying degrees of risk. Stocks are represented by the MSCI ACWI IMI NR USD Index. Bonds are represented by the BBgBarc US Agg Bond TR USD Index. For the ‘Buy and Hold 60/40’, the investor is assumed to start with $600,000 in stocks and $400,000 in bonds. The investor simply holds the positions and accepts the changes to the portfolio allocation mandated by buy and hold returns. The ‘Rebalanced 60/40’ investor is assumed to start with the same $600,000 in stocks and $400,000 in bonds. However, when this investor’s stock allocation drifts below 55% or above 65%, the portfolio is automatically rebalanced back to target. This exhibit does not take management fees, taxes, or taxes strategies such as tax loss harvesting nor tax considerations such as capital gain taxes into account. This case study utilizes returns from 1/1/2000 through last month end.

Savant’s marketing material and/or rankings should not be construed by a client or prospective client as a guarantee that they will experience a certain level of results if Savant Wealth Management is engaged, or continues to be engaged, to provide investment advisory services nor should it be construed as a current or past endorsement of Savant Wealth Management by any of its clients. Please see our Important Disclosures.