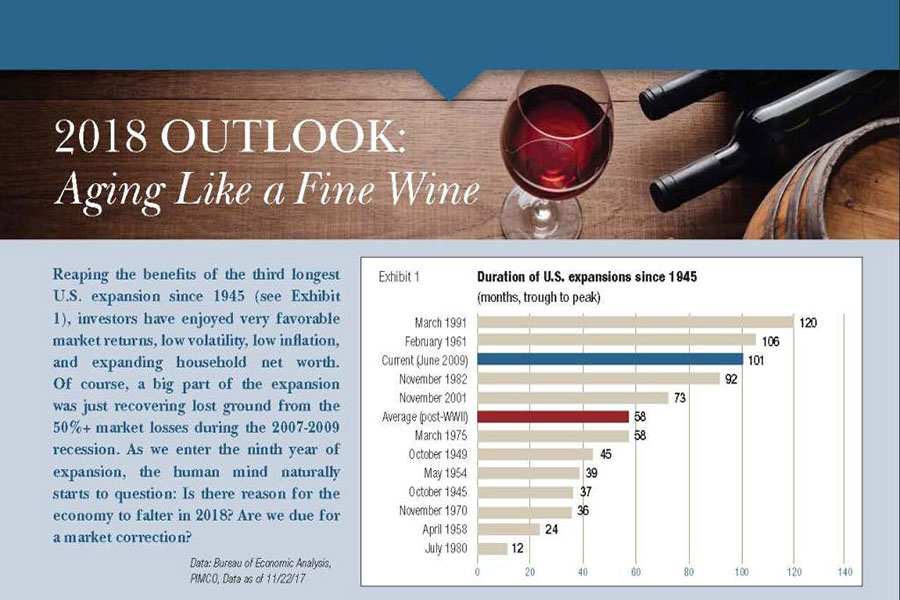 Reaping the benefits of the third longest U.S. expansion since 1945 (see Exhibit 1), investors have enjoyed very favorable market returns, low volatility, low inflation, and expanding household net worth. Of course, a big part of the expansion was just recovering lost ground from the 50%+ market losses during the 2007-2009 recession. As we enter the ninth year of expansion, the human mind naturally starts to question: Is there reason for the economy to falter in 2018? Are we due for a market correction?

Economic expansions and bull markets don’t die of old age, but rather due to other, sometimes unforeseen, reasons. For our outlook this year, we take a look at the health of the U.S. and global economies as well as what risks are present today. In short, we don’t see typical triggers present today, which have caused economic recessions in the past. Some of those are:

Absent major imbalances or shocks, it appears the U.S. economy will continue aging more like a fine wine rather than wither on the vine. The backdrop of a healthy U.S. economy is a global economy with improving fundamentals across developed and emerging market economies. Let’s take a look at what 2018 may have in store for economic health, monetary policy, and market valuations.

The outlook for 2018 appears to be solid for the U.S. and improving globally. There are some moderate risks to consider, but the ones listed below (Exhibit 2) don’t appear to be significant enough at this time to warrant concern about a major downturn or recession.

The current focus for the Federal Reserve is balance sheet reduction and small, incremental rate increases to slowly move away from the accommodative monetary policy. This should continue unless inflation surprises cause the Fed to be more aggressive in its tightening. On the other hand, if inflation does not continue towards the Fed’s 2% target, it could slow the path to rate normalization. Market expectations are for two rate hikes in 2018 (up to 2%) with the possibility of three. The stated focus for rate hike decisions is price stability (inflation) and employment, but financial market stability (described below) is always on the forefront of the Fed’s mind.

Several Federal Reserve banks (as well as other providers) measure financial stability and stress through the compilation of financial condition indices. While each index has a different composition, they are all correlated according to the St. Louis Federal Reserve. Below is the Chicago Fed’s National Financial Conditions Index as it goes back the longest to 1971 (Exhibit 3). This index measures over 100 financial variables in the areas of risk, credit, and leverage. It has provided a real-time measure of financial conditions as well as insight into forward-looking conditions. As you can see, the index does not show signs of stress at this time with a below zero level.

One change on the near-term horizon is the replacement of Fed Chair Janet Yellen, whose four-year term ends in early February, with nominee Jerome Powell – a Fed governor since 2012. Based on his track record and stated position, this new leadership should not change the course of policy. In sum, it appears monetary policy will be fairly stable and predictable for 2018.

Given the strong stock returns, U.S. stock valuations (P/E ratios – stock prices relative to company earnings) are now less attractive than they were at the start of the period or even five years ago. The S&P 500 P/E ratio (next 12 months) is 18.2, while the historical average is 16.0 (20 years), making it approximately 13.8% overvalued by that measure. International stocks (MSCI ACWI ex-US Index) are still slightly undervalued at 14.3 today versus 14.5 (20-year average). However, many market experts point out that P/E ratios should be higher than normal in light of continuing lower interest rates and inflation. Still, higher valuations for stocks put them more at risk for a correction if company earnings don’t keep pace with stock prices and valuations become more extreme. However, evidence has shown that valuations aren’t usually good predictors of short-term returns, which is why Savant uses them as components of long-term return estimates. As a result, the higher valuations have reduced Savant’s long-term expected returns. Specifically, Savant’s 20-year long-term expected return for U.S. large cap stocks is 7.3% compared to the expected return of 8.5% five years ago. Read Savant’s whitepaper on forward-looking returns.

In the short run, many types of events can cause market corrections – a normal part of stock market investing. According to Fidelity, since 1920 the S&P 500 Index has averaged three 5% corrections each year, one 10% correction each year, and one 20% correction every three years. The last 5% correction was summer 2016, making this the longest run without a 5% correction since the mid-1990s. So the likelihood we are closer to a correction is greater today than five years ago. The spark for a correction could be anything such as an unfavorable geopolitical event, an unexpected inflation report, a major cyberattack, or a surprise drop in economic activity.

Since triggers of market corrections are unpredictable, we focus on the long-term expected returns for markets. The key drivers of long-term market returns are company earnings and the prices investors are paying for those earnings. Many other factors will continue to cause short-term noise in markets.

In our view, the key focus areas for 2018 should be having reasonable return expectations and containing costs and taxes on investments. This is where Savant spends a significant amount of time when managing portfolios. The other key areas are asset class selection and asset allocation which are main determinants of how the portfolio performs over time.

We believe Savant’s proactive oversight of those areas of the investment portfolio should help afford you the ability to stay focused on your long-term financial plan and life goals.