History in the Making: Social Security Then and Now 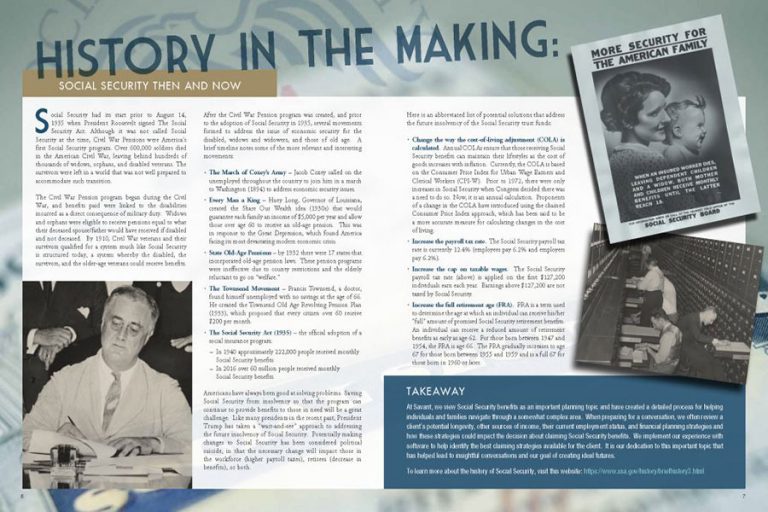 Social Security had its start prior to August 14, 1935 when President Roosevelt signed The Social Security Act. Although it was not called Social Security at the time, Civil War Pensions were America’s first Social Security program. Over 600,000 soldiers died in the American Civil War, leaving behind hundreds of thousands of widows, orphans, and disabled veterans. The survivors were left in a world that was not well prepared to accommodate such transition.

The Civil War Pension program began during the Civil War, and benefits paid were linked to the disabilities incurred as a direct consequence of military duty. Widows and orphans were eligible to receive pensions equal to what their deceased spouse/father would have received if disabled and not deceased. By 1910, Civil War veterans and their survivors qualified for a system much like Social Security is structured today, a system whereby the disabled, the survivors, and the older-age veterans could receive benefits.

After the Civil War Pension program was created, and prior to the adoption of Social Security in 1935, several movements formed to address the issue of economic security for the disabled, widows and widowers, and those of old age.

A brief timeline notes some of the more relevant and interesting movements:

Here is an abbreviated list of potential solutions that address the future insolvency of the Social Security trust funds:

At Savant, we view Social Security benefits as an important planning topic and have created a detailed process for helping individuals and families navigate through a somewhat complex area. When preparing for a conversation, we often review a client’s potential longevity, other sources of income, their current employment status, and financial planning strategies and how these strategies could impact the decision about claiming Social Security benefits. We implement our experience with software to help identify the best claiming strategies available for the client. It is our dedication to this important topic that has helped lead to insightful conversations and our goal of creating ideal futures.

To learn more about the history of Social Security, visit this website: https://www.ssa.gov/history/briefhistory3.html