The U.S. Dollar: A Haunted House of Cards? 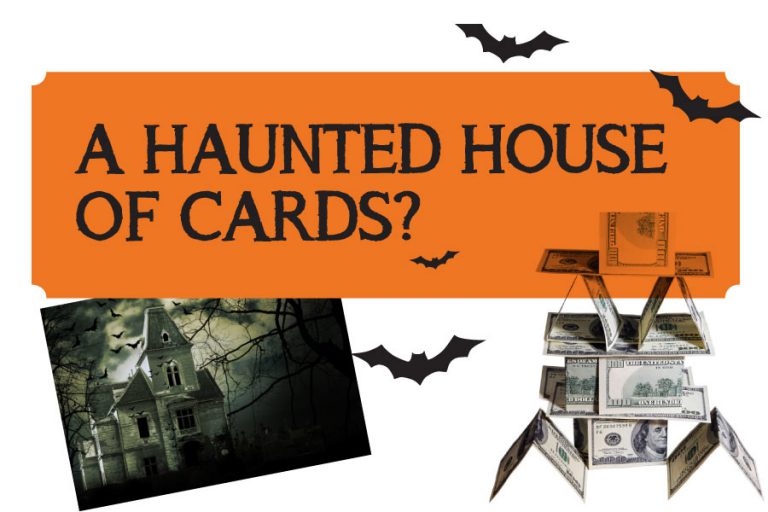 As the government’s money printer goes “Brrrr!” some investors have been spooked by the growing U.S. deficit and the potential for a weaker U.S. dollar. Through July, the United States 2020 budget deficit reached $2.8 trillion and is projected to reach $3.7 trillion by year-end. These figures sound enormous to most individuals worried about balancing their own household budgets. In fact, even relative to the government’s history, this is a large number. For perspective, in 2019, the U.S. government ran up a deficit of only $984 billion. These increasing deficits and the ever-increasing level of national debt (closing in on $27 trillion) have led many pundits to forecast a drop in the value of the U.S. dollar. The combination of a growing deficit and a weaker dollar sound scary at first, but let’s find out just what is “behind the mask” for globally diversified investors.

To many, growing debt might bring to mind a Freddy Krueger-like character lurking in the background, just waiting for the right moment to wreak havoc on our lives. On its own, the nominal amount of government debt issued means very little. Instead, we can look at interest owed relative to the economic output of the United States. Below, in Exhibit 1, we compare the net interest payments on U.S. government debt to the country’s Real GDP. We can see that while interest owed has trended up on the margin, so has the economic output of the United States. In layman’s terms, we can compare this to an individual who, over the course of 20 years, made all their debt payments on time and saw their income rise from $40,000 per year to $100,000 per year. At the end of this period, a mortgage officer or credit card company would likely consider this individual more creditworthy and be willing to extend them additional credit. Meanwhile, the individual is more likely able to finance a new house or a more expensive car.

In Exhibit 2, we look at the percentage change in public debt-to-GDP relative to the S&P 500’s annualized return for the following five years. This exhibit highlights two key points:

While debt is a scary word for many individuals, so long as a country maintains its ability to grow and service the debt, it appears not to be detrimental to the future economy. With that said, the level of debt is one of many factors that can play a role in determining the value of an economy’s currency.

A vocal group of perennial doomsayers has told spooky tales of a pending collapse of the U.S. dollar. These extreme forecasts are primarily driven by two factors. First is the potential for the U.S.’s increasing deficits and debt load to spark less use of the dollar globally. While many highly technical factors go into this, at a high level the concern here would be that U.S. debt grows to such a level that relative to other economies, others would not want to accept future payments in U.S. dollars in fear of depreciation. One caveat is that the U.S. is not the only major economy to crank up the money printer this spring. On a relative basis, U.S. debt is not expanding quite as fast as those of some of our peers. Additionally, the U.S dollar is the world’s primary reserve currency, and most commodity contracts worldwide trade in U.S. dollars. These factors alone should provide quite the challenge for a devastating dollar devaluation to occur.

The second factor driving the U.S. dollar is the notion that rapidly increasing debt may spark U.S. inflation. For the past decade, the Fed has tried mightily – and unsuccessfully – to bring inflation up to its 2% target. Those looking to sell out of U.S. dollars must buy in some other currency. Therefore, this potential inflation should be looked at relative to the potential inflation in Europe, China, or other economies with notable currencies. This is not to say the dollar will not depreciate or that inflation will not surprise to the upside. But it seems unlikely we will undergo the tremendous devaluation that some are warning of.

If the dollar were to depreciate, what would that mean for diversified investors? As Exhibit 3 demonstrates, this might be exactly where global diversification pays off!

Between 1973 and 2019 when the dollar depreciated by more than 5% in a year, U.S. stocks still performed well on average. However, international developed stocks also provided an average return of greater than 25% per year on average to U.S. investors.

Whether the concern is trillions of dollars in debt or a weakening domestic currency, naturally the initial reaction is trepidation. But if we peel back the layers and dive into the evidence, we believe diversified investors have less to fear. It is certainly possible that the increasing deficit could jumpstart inflation or weaken the U.S. dollar, but we believe globally diversified investors will realize a house of cards does not shelter their portfolios, but rather a home built with brick and made to withstand the storm.

Savant Wealth Management is a Registered Investment Advisor. Different types of investments involve varying degrees of risk. Indices are unmanaged, do not reflect fees and expenses and are not available as direct investments. Returns are calculated in U.S. dollars and reflect the reinvestment of dividends and other earnings. Savant’s marketing material and/or rankings should not be construed by a client or prospective client as a guarantee that they will experience a certain level of results if Savant Wealth Management is engaged, or continues to be engaged, to provide investment advisory services nor should it be construed as a current or past endorsement of Savant Wealth Management by any of its clients. Please see our Important Disclosures.