The Tradeoff: We’ll Make It, I Swear! 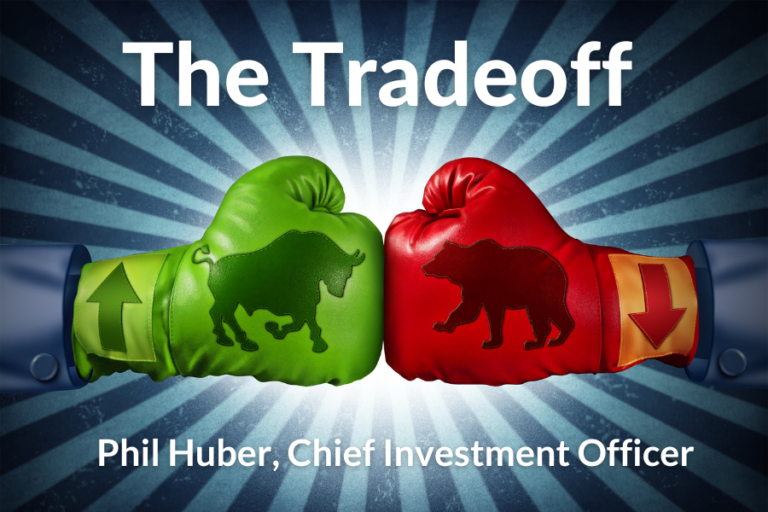 Welcome to the inaugural edition of The Tradeoff, a monthly reflection from Savant’s Chief Investment Officer, Phil Huber.

Why “The Tradeoff,” you ask?

At its core, investing is an exercise in managing tradeoffs: return objectives, risk tolerance, income needs, liquidity preferences, tax considerations, and so on. The deeper you go, the more you realize that it’s tradeoffs all the way down.

We’re past the midpoint of 2022 and like Bon Jovi, many investors feel like they are living on a prayer.

The S&P 500 had its worst first half of the year since 1970 as stocks officially entered bear market territory. Bonds, as measured by the Bloomberg U.S. Aggregate Bond Index, finished down double digits as well. Through June 20th, the classic U.S. 60/40 portfolio lost 17 percent, as measured by the Vanguard Balanced Index Fund.

So, what transpired to wreak such havoc across stock and bond markets simultaneously?

Let’s start with the “I” word: Inflation.

In short, consumers are feeling the pinch.

Initially presumed to be transitory due to pandemic-related supply shocks, it proved to be anything but as time marched on and each successive CPI print was higher than the last. Eventually, even the word transitory proved to be, well, transitory as the Fed retired it from their lexicon in December 2021 as it became clear that inflation wasn’t going anywhere. Not without their intervention, that is.

And thus began the path toward normalizing interest rates and tightening financial conditions. Inflation is ultimately driven by supply and demand factors. While the Fed has no control over supply, they can certainly exert their influence over demand.

This brings us to the “R” word: Recession.

The initial underreaction by the Fed to rising inflation put them in the unenviable position of playing catch-up, raising rates much faster and more aggressively than markets had priced in. The perception is that they view a mild recession as the lesser of two evils relative to inflation spiraling out of control.

Some people believe we’re already in a recession. It certainly feels that way for many folks, given the inflationary backdrop.

At present time, the data seems to dispel that notion.

For starters, the labor market is still red-hot. Jobs are still plentiful, with nearly two open jobs for every unemployed person. The unemployment rate has held at 3.6% for four straight months, just above a 50-year low.

Another point in favor of a stronger economy is the balance sheets of both households and corporations. Corporate profit margins and cash balances are near record levels, and consumers still have record high savings from the pandemic-related stimulus, as evidenced in the chart below.

We know that recessions and bear markets are normal and expected parts of economic and market cycles. It is a virtual certainty we will experience several of each in our investing lifetimes. But as Morgan Housel points out in his tweet below, pretty much everything about a specific recession is unknowable ahead of time.

We’re all aware of the bad news out there. We’ve been drowning in it, ad nauseum. But the present and the past are of less importance for investor outcomes. The question we must ask ourselves now (in sticking with our ’80s rock music theme) is:

And now for some good news. Or at the very least, some glass-half-full optimism …

Inflation May Be Moderating

On June 29th, Chmn. Powell delivered this absolute “chef’s kiss” of a quote:

Think about that for a second. Achieving price stability is literally one of the Federal Reserve’s dual mandates and even they are honest and transparent about how challenging it is to forecast.

If they can’t accurately forecast it, what makes us think we can?

While we should always approach any inflation predictions with a healthy dose of humility, there may already be some signs that inflation is beginning to moderate:

Sentiment is in the Dumps

Consumer sentiment (currently sitting at 50.0) is the worst reading in the history of the survey. As counterintuitive as it may be, sentiment troughs are typically followed by above-average market returns and vice versa.

Bear Markets All Have One Thing in Common

Eventually, they all come to an end.

With historical data as our guide, it seems more likely that we’re closer to the end than the beginning of this one.

Here is some context around historical bear markets, using the S&P 500:

Another common theme of bear markets is that they are often a great time to put money to work.

After a bear market officially begins, the stock market historically generates some of its best performances. Per research from LPL, the median 12-month return for the S&P 500 after it declined 20% has been 23.8 percent.

Prior to 2022, the two biggest gripes that investors had were:

While it took some short-term pain to get there, we’ve finally reached a point where expected returns for both stocks and bonds are more attractive on a go-forward basis.

Beginning with stocks, valuations across the global market spectrum reflect cheaper prices. Earnings can always go lower from here, but valuations are significantly more compelling now than they were 18 months ago.

On the fixed income side, there is a very strong relationship between starting yields and the subsequent 5-year returns for bonds. Expectations for intermediate-term fixed income returns are materially higher today than at the beginning of 2022.

Diversification is Working, Just Not Where You Might Expect

While it seems like bright spots in a diversified portfolio are few and far between these days, it’s not all red out there. Several alternative asset classes – trend following, catastrophe reinsurance, and direct lending to name a few – have been delivering positive returns this year in what has been a challenging environment for traditional portfolios.

Investors have more options than ever before to break free from relying on stocks and bonds alone to build a portfolio. Instead, we can augment those core asset classes with an ensemble of valuable, diversifying strategies. We highlight several of them in our recently published white paper on alternative investments.

There is a lot of uncertainty out there, but much of it is already priced into the market.

A recession may be on the horizon, or inflation may continue to surprise to the upside. But investors are being compensated with higher yields and lower valuations to reflect the elevated risks.

Today’s environment might have you feeling like you’re living investing on a prayer. But it doesn’t have to be that way. A data-driven, evidence-based approach that harnesses diversification from many sources can potentially be an investor’s best friend in uncertain times.

The Fed raised interest rates 75 basis points today. This was not a surprise; it was the expected outcome. Inflation is way too high, and the Fed is moving aggressively to contain it.
Learn More
July 20, 2022

It has been an unusual time for the markets as both stocks and bonds have experienced meaningful declines which presents a unique challenge for us as investors. As we acknowledge this reality, we must also be careful not to overreact and abandon the time-tested principles that have seen us through challenging periods in the past.
Learn More
July 19, 2022

Inflation remains the biggest concern hanging over markets with headline inflation reaching a 40-year high; this has created a tough environment for bond investors and the Fed has indicated they will do “whatever it takes” to combat inflation.
Learn More