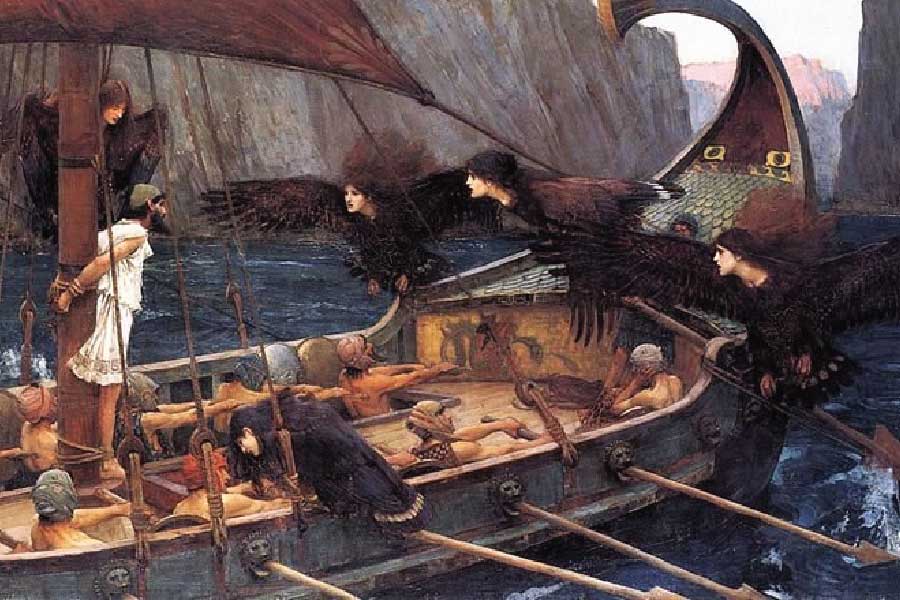 In The Odyssey, Greek hero Odysseus suffers trials and tribulations as he spends a decade on his journey home after winning the Trojan War.

During this expedition, Odysseus is nearly thwarted by the siren songs which beckon him to surrender to their beauty, but Odysseus knows their deception would cause him to crash his ship upon the rocks.

He is drawn to their songs but knows the melodies would lead him and his crew to certain death. Odysseus orders his crew to stuff their ears with beeswax and tie him to the mast so he would be able to hear their alluring songs without acting upon their tempting messages.

Upon hearing the sirens’ beautiful song, Odysseus demands to be untied. But his crewmen tighten the ropes that bind him to the mast. In the end, after ten years of turmoil, Odysseus triumphantly returns home to his wife and son.

Sirens of the Stock Market

Over the last few years, the stock market has given investors a roller coaster ride. Recently, amidst the COVID-19 pandemic, the S&P 500 fell 35% in a little more than 30 days, the quickest decline ever of this magnitude. This was preceded by a strong year of returns in 2019, but that was just after one of the worst quarters in market history, the fourth quarter of 2018.

This dizzying turn of events over the last 24 months can serve as a guide, if we let it. It was a period in which markets were extremely volatile, both on the upside and the downside. Throughout this volatility, we have been assaulted by prognosticators and their economic forecasts, predicting unending gloom and doom scenarios.

How could we hope to act rationally and with common sense when surrounded by the temptation of reacting to current news?

In the throes of any crisis, we tend to forget that we have faced adversity before and have likely been well-rewarded for the convictions of discipline, process, and patience in the long run.

Steering clear of the temptation to believe in a crystal ball and refusing to make investment decisions based on short-term economic news can be difficult, but in the end will likely increase your chances of success.

Investors can learn from both the story of Odysseus and recent market volatility. While the tale of Odysseus was written some 2,300 years ago, it remains strikingly relevant today as Wall Street sirens continue to sing the songs of forecasting, chasing returns, market timing, and stock picking.

A Siren Song is defined as “the enticing appeal of something alluring but potentially dangerous.” The Wall Street siren song carries the false promise that investors could capture untold wealth and riches if they could accurately and persistently predict the future. Such is the temptation with stock picking, market timing, and other strategies that rely on a crystal ball. The allure of getting it right can be a powerful temptation, and with 24-hour news relentlessly singing their siren songs to the investing public, many succumb.

There is a famous study by Dalbar that has surveyed individual households for more than 20 years and consistently found a startling and unfortunate fact: The S&P 500 index from 1999 through 2019 annually returned 6.1%. However, the average stock investor made only 2.5%, barely keeping up with inflation.

If the market has offered this rate of return, why such a disparity? Too often decisions are based on greed and fear – the classic “buy high/sell low” scenario. Heeding the siren songs that appear in the investing world has played a part in this behavior.

Steer Clear of the Rocks

The market reached its most recent bottom on March 23, 2020. At that point, when things looked the gloomiest and the financial media told us that world markets were coming to an end, the rebound began. Most investors were tempted to panic out and wait until ‘things settle down.’ But those who had a plan in place, rebalanced their portfolios, and globally diversified have weathered this most recent storm by tuning out the ‘sirens’ that were “telling” them to do otherwise.

Tie Yourself to Your Financial Goals

Like Odysseus, successful investors need to tie themselves to the mast so the siren songs of Wall Street don’t have an opportunity to tempt them into behaving impulsively or believing the latest fad or promise. The mast for investors should be what has worked over time – asset allocation, diversification, rebalancing, discipline, patience, and having a sound financial plan that is tied to your long-term goals. These principles have ultimately rewarded those who stick with them over time.

The past few years have been filled with trials and tribulation for many investors. But those who kept their eyes fixed on the long-term reward of the journey and kept their wits about them have emerged better off for their valor, patience, and discipline.

Ed earned a bachelor’s degree in political science and international relations from the University of Kansas. He serves as a board member of The Farther Foundation.